Every Friday evening at 20:15 it happens: in the series AVROTROS Vrijdagconcert, the most beautiful classical music comes to life. Venue: TivoliVredenburg in Utrecht.

Also in the new season 22-23, the series is richly filled. With special attention to the composers Willem Pijper, Jan van Gilse, Sergej Rachmaninov, Max Reger and Ralph Vaughan Williams, the 900th anniversary of the city of Utrecht, a new artist in residence and young talent.

The AVROTROS Friday Concert consists of six series, each with its own character and atmosphere. Besides the 'large' repertoire, there is room for premieres and often unknown music from the Netherlands and abroad.

The sale of season tickets, passe-partouts and single tickets has started.
Order now and be sure of the best musical start of your weekend!

Premières and Dutch music
An important feature of the AVROTROS Friday Concert series is its focus on new music and music by Dutch composers. This is also an essential task of the Radio Philharmonic Orchestra and the Groot Omroepkoor - main players in this series. Dutch compositions by Jacob TV, Bram Kortekaas and Kate Moore, among others, and premieres by Mason Bates, Guillaume Connesson and Sofia Goebaidoelina can be heard alongside well-known and much-loved masterpieces from the 'iron' repertoire.

Artist in residence: Ella van Poucke
As artist in residence, the young Dutch cellist Ella van Poucke brings extra colour to the 22-23 season of the AVROTROS Vrijdagconcert. Her special qualities as a soloist and chamber musician are shown to full advantage in four concerts: see the concert agenda on Friday 4 November 2022, 10 February, 3 March and 17 March 2023.

The Series of AVROTROS Friday Concert

AVROTROS Classical 2
AVROTROS Klassiek 2 combines highlights from the classical repertoire with striking accents for connoisseurs and people who are open to a twist on a classical menu.
> View and order the series via the site of TivoliVredenburg

AVROTROS Vocal
The best choirs and vocalists, in seven impressive concerts.
> View and order the series via the site of TivoliVredenburg 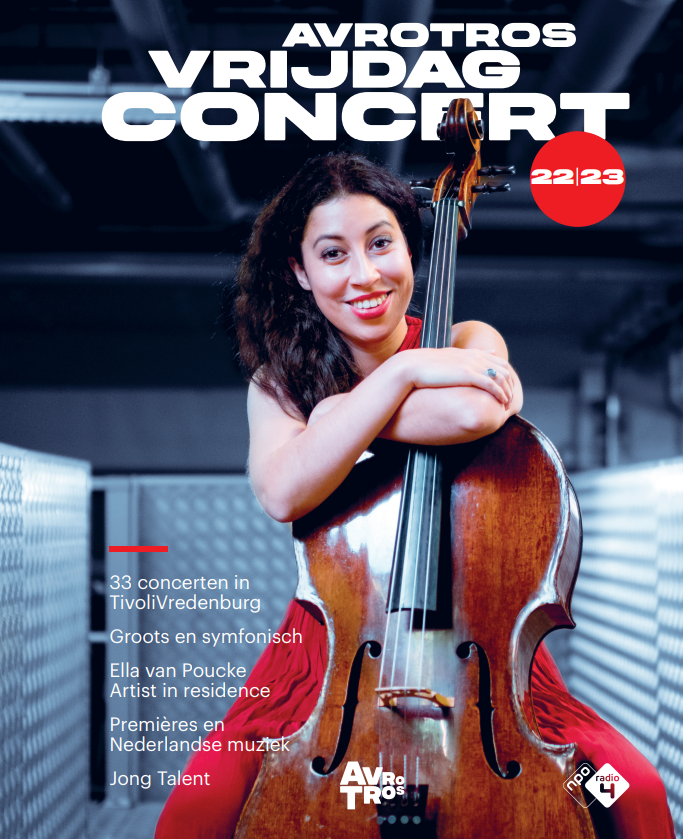